Our relationship with Mercer Family Winery 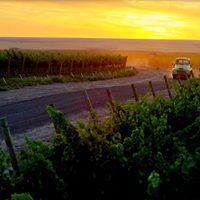 Mercer Estates has been farming in Washington for four generations

I don’t usually taste dirt. But I can taste the fruits from a good terroir, and this month’s featured wines are from some of the best in Washington State. We’re kicking off our Washington Wine Month with three featured wines, and one of them, Mercer Estates Chardonnay, has become a huge favorite of mine.

Mercer Estates is a family-run operation for four generations, going on five. Their family was lucky enough to homestead in the Horse Heaven Hills, located in the South central region of Washington, back in 1886. They started out as carrot farmers, not knowing that they were sitting on a gold mine for winemaking until 1972, when they were inspired to give grapes a try. With sustainable farming methods at the core of their operation, they are true stewards of the land. It’s the same way we at Duke’s feel about the ocean—we have to care for it so that it will keep producing for generations to come.

One of the reasons their grapes are so bold and expressive is their soils, which were deposited by the Missoula Floods during the last Ice Age. Another reason is the low amount of rainfall and the larger diurnal shift in temperatures compared with similar growing regions in Southern France. Yes—I said it, these guys make wine better than the French!

One thing I love about their Chardonnay is it pairs great with our seafood: full and lush with bright acidity (crisp, with a perfect hint of pucker) followed by notes of citrus and a clean finish. It’s one of the reasons I chose this varietal—this month we’re also featuring menu specials that celebrate shellfish and crustaceans.

If you find yourself in the Prosser area of Washington, stop in and say hi to the Mercers. Just tell them John sent you. Until then, come on in to any Duke’s for a crisp, delicious taste that hails from one of the best grape-growing regions in the world.